I tried these for the first time yesterday for our semi-annual General Conference luncheon.  I had found several recipes online and read many rave reviews, so I figured I would give them a try.  They were a huge hit.  I combined, then modified two different recipes, so I guess the end-result would be MINE. 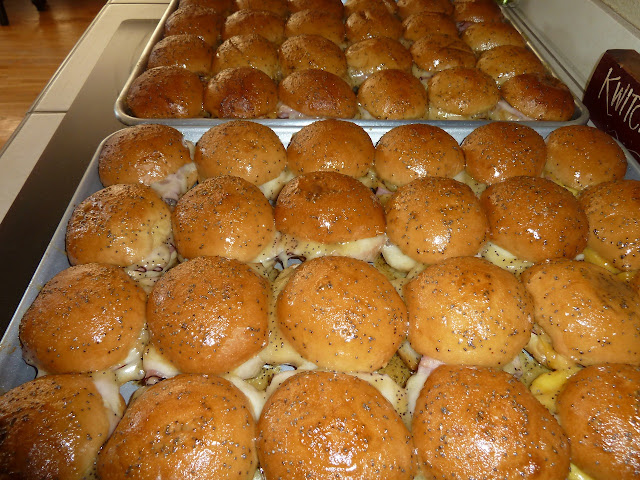 Funeral Sandwiches
(I might need to find another name)

Dinner rolls*
24+ slices Black Forest Ham (I used Castlewood brand from Sam's, deli ham would be great too)
24 slices Swiss Cheese (I used the pre-sliced Tillamook, and cut the slices into smaller squares, then also used the edge pieces, 2 edge slices per sandwich)

Slice rolls, if needed.  Squeeze 24 rolls on an 11x15 inch sheet pan (it's okay if they are touching).  Place one slice of ham (some of my slices were super thin, so I added another half slice with those) and one slice of cheese on the bottom half of each roll, then replace tops.

*Most recipes I found called for King's Hawaiian Rolls.  I am not a fan of their texture and sweetness, so I opted to go for the dinner rolls from Sam's Club.  They were perfectly chewy (not spongey) and perfectly sweet with the following sauce.

Mix together with a small whisk.  Brush tops of ham and cheese rolls liberally with sauce, then pour remaining sauce over all.  Cover pan with foil and refrigerate for 4 to 24 hours.  Preheat oven to 350 degrees.  Bake rolls, covered, for 10 minutes, then remove foil and bake another 10 to 15 minutes until the tops are golden brown.

Since I was making these for a crowd, here are the quantities I used:

That made 4 sheet pans of rolls (96 total), with a few plain rolls left over, which was perfect for guests who may not want/like ham and cheese (only my cute 4 yr. old neighbor friend preferred a pb&j). 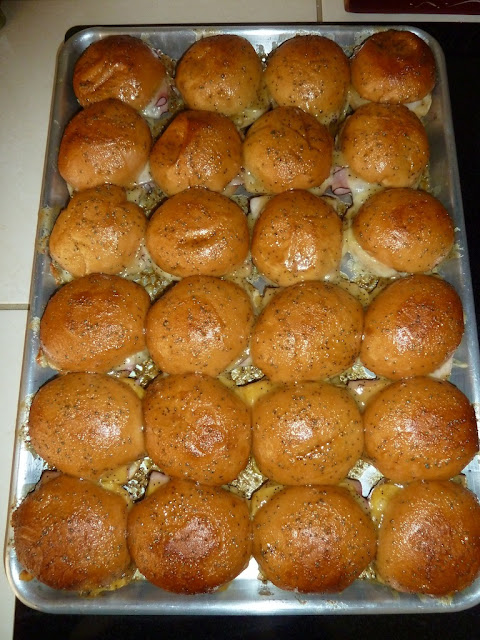